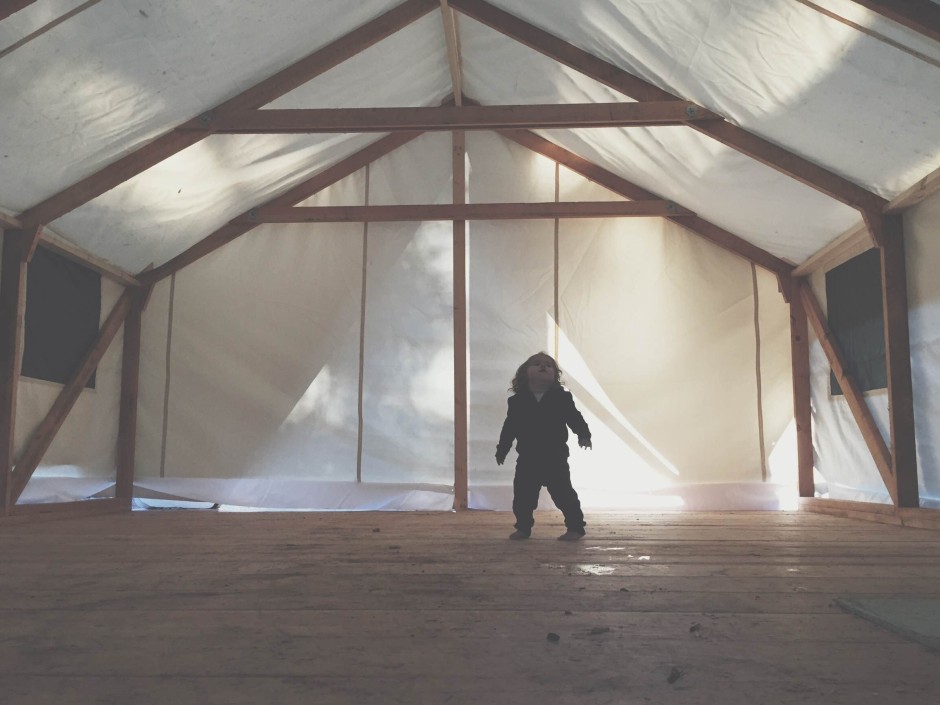 It’s been a week since I said “we’ll be moved in!” but alas, this isn’t the case just yet…and I can’t blame anything convenient like the weather even.

The progress has been steady and the work has my broody mama-to-be(again) heart all warm and fuzzy but the reality is there’s a ticking time bomb in my ever expanding belly that is making my brain think unrealistic “are we there yet?!” thoughts about everything. An hour delay feels like an eternity, a week can seem like a massive failure unless I give myself a proper moment to wilt…weep a bit…then recover with a better, more logical (less hormonal) perspective on what matters and where we’re at.

Let’s start with the most positive news. We have a magnificent cook stove purchased from one of our amazing new neighbours, Jill and Ben at Southend Winery. What makes it magnificent? Well, it ran all night last night to keep the tent toasty warm and did not require anyone to get up to stoke it during that time. From my perspective, this…is basically a miracle of miracles in assets going into winter.

Ok, back to the realities of going rogue, making up the rules as we move along.

Given when we bought the land, it’s been a toss up of what could be accomplished before winter. So far, we’re on track to have the tents ready, a powershed in and of course the animals are all settled into their brand new abodes. Fencing remains a big consideration. A hay shed will wait until next year…which means water collection off the planned roof for this building will also wait. That’s ok, there are worse things and we can sort out other storage for hay.

Of course, the question that lingers in the back of my baby-crazy brain is…could we have built a cabin? I mean, not in the full, complete, totally finished sense but to ‘lock up’. Like we could sleep there. Work on the interior throughout the winter but have walls up, windows in and a woodstove going.

Possibly. It’s dreamy, we love how it’s shaping up and I have all sorts of ideas for how we can sort out the interior so that this cozy tent home could make us happy for more than a winter. Perhaps a year. Maybe two even. All to give us a bit more runway and financial freedom to build the cabin slowly instead of having to rush.

The tent was looking good on the frame with the tarp draped over it but the next morning we noticed corners on the one side were up a bit. Not fitting as snuggly as they should, just a bit off. At first we thought the seam at the top might be off. Ok, need a small team of people to move it over.

This is where the tarp was removed. We figured out shortly thereafter that it wasn’t the tent that was off, there was a slight bowing out with the side walls that were creating about a 1/2 inch difference in size, prohibiting the walls from completely settling down. No big deal, right? Except the tarp was taken off and this is prime PNW dew time so every morning the roof of the tent soaked up more and more morning mist…expanding the gap from 1/2 inch to 4 inches in just a few days.

I arrived, toddler in arms, as Scott and Michelle were securing bungie cords to start trying to expand the tent back out. Unsquinch it. Make it less…shrunken. This is the point where all of this dream-y tent business sounded awful. I WANT MY CABIN. CABINS DON’T SHRINK.

There was talk of fabric softener wash for the roof (do we have a ladder tall enough?) but Perry at Deluxe Wall Tents offered the solution that so far has had the greatest impact.

Get the fire going.

Wouldn’t you know it, just a couple hours later and the tent was looking far less uncomfortable on the frame. Almost like it might fit.

Cue fireworks, balloons, marching band…the works. Of course, at the same time, the boys are testing everything Scott throws at them fencing-wise so while I’d love to say that this meant today all the rest of the finishing touches could be done and we could finally spend a night in there this Friday….it’ll likely be Sunday. Maybe Monday.

But we’re getting there. I can actually start thinking about couches, what to do with the inner dividing walls between the sleeping area and living area…what should be the first thing to cook on the stove.

Lesson here? Don’t take the tarp off. For *anything*. And always make sure your woodstove burns bright through the night.

Oh, and in other fun news? Our herd name was approved. We can officially make plans and in all of our spare time get a website together for Renegade Farm. Taking It All In, Without Taking It For Granted

Everything With A Purpose

Nesting & Nurturing Through The Third Trimester