A Tribute to Moose 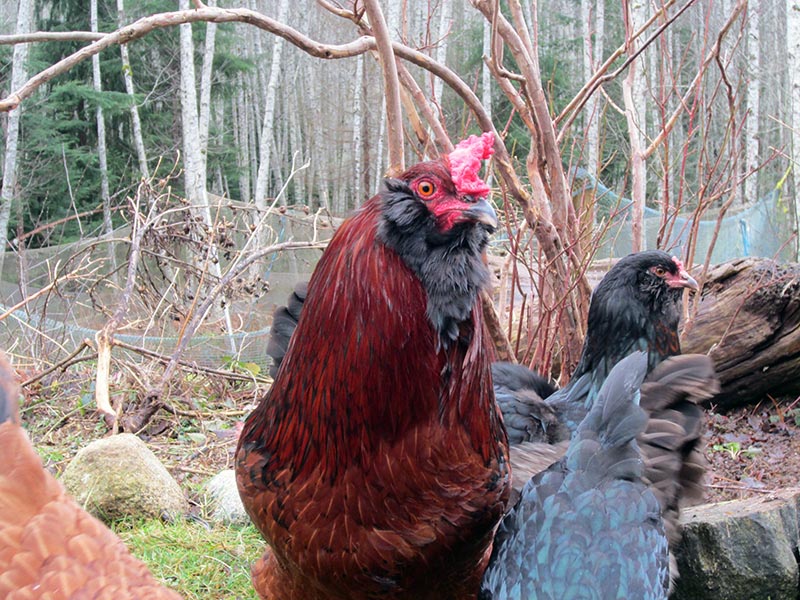 There’s a dead rooster hanging from my front porch.

Not exactly an inspirational quote, but the matter-of-factness of this morning doesn’t leave me feeling terribly inspired. Reflective maybe. Sad. Definitely.

Moose was the rooster we took a chance on. His father, Blue, was our very first rooster. The cuddly, cooing little buddle of blue ameracauna lured us in with his good looks and charming personality. Until we went away for a couple of weeks and came back to a rooster who had thoroughly freaked out our house sitter and turned into a tiny tyrant capable of making the back of your knees ring from frequent, repeated jump kicks.

I spent months trying to reform the bastard until he started harassing the hens as severely as he had been attacking us. Then it was game over. Off with his head.

We had hatched out 17 chicks and put in an order for another dozen straight run chicks to be picked up a few months later in an effort to expand and diversify the flock. Of course, this is also when Stella decided to take matters into her own hands and hatch out another 8 chicks, I suspect in an effort to help us find a suitable heir. My original decree was that none of the home raised roosters would be retained. Only one (possibly two) of the new breed of chicks would take over Blue’s post as king(s) of the yard. That stupid beautiful bird was just too heartbreakingly belligerent. Pigheaded. Loud. But then I noticed Moose.

There were a handful of mini-Blues along with two golden headed roosters that were the most aggressive of the bunch. Two other pretty birds that fooled us into thinking they were hens long enough to acquire names, but neither were keepers. Moose stood out. He was big, his comb and colouring made it clear that he was one of Stella’s chicks – making him an Ameracauna/Rhode Island Red cross. You would think this combination would have deterred us, but something about this teenage bird made me stop and know that he was the rooster to keep. This even tempered boy didn’t go around fighting incessantly. He watched and waited and patiently acquired the favour of most of the hens in the yard. Moose ruled the yard for almost two years. No knee attacks. No need to bring a broomstick out to feed the flock. Not once did Moose ever step out of line with either of us. He was a perfect gentleman his ladies and even the Black Copper Marans rooster we ‘promoted’ to his second in command last fall once the flock was at 30 hens. (Sidenote: in an odd departure from our usual code, we’ve never named the BCM.)

Last summer we tried a different brand of chicken layer pellets – non-organic, cheaper. We were rewarded with three (THREE) cases of bumblefoot. The two hens who had ‘surgery’ in our bathroom have made it through just fine but Moose was never the same. He started spending a lot more time resting, less time roaming around. We tried to order meds from the States, but after confirming payment/shipping the company canceled the order – without notifying us. So another month passed while the infection spread and I started to come out to terms that my handsome rooster wasn’t going to make it.

All the while, his hens, the top ranking girls in the flock, never left his side – despite more viral, proud roosters around that they could have defected to. If he wanted to stay in the coop, resting on the roost, they stayed too.

This morning while filling up the chicken feeder he started to open his mouth wide repeatedly, stretching out his neck as though something was caught in his throat. He stumbled backwards away from the flock as though drunk. I ran up to the front door and asked Scott for a sharp knife. Moose was dying and I didn’t know how long this was going to draw out – if I could help him pass more quickly, then I should.

He was in the final throes of what appears to have been a heart attack by the time I got back to the run where he lay crumpled next to the tire, under the coop. I gently pulled him out and watched his eyes close.

No need to intervene.

The animal loving, anthropomorphic side of my brain wishes I had stayed with him. Had been there to say goodbye and thank him for being such an incredible rooster, showing us exactly what we will now always look for in a flock leader. Setting our standards unbelievably high.

But the realist, the farmer I suppose, knows this wasn’t our relationship. He didn’t need me to be there, nor would he have likely wanted me (or anyone) there. We didn’t cuddle, he didn’t eat out of my hand. He made sure his girls were well taken care of and both of us respected each other’s space.

I have to pick a new rooster now. Out of the dozen or so juvenile boys hatched out this summer all vying for top dog status. So far, none of them measure up. I will likely leave the decision to who doesn’t piss off the BCM (I’m assuming he will take over as flock leader – simply because he has the spurs to defend himself against these youthful jerks without even trying).

There’s never going to be another one just like Moose. I’m so glad I took a chance on this beautiful bird.